The “We’ve Always Done It This Way” Mentality 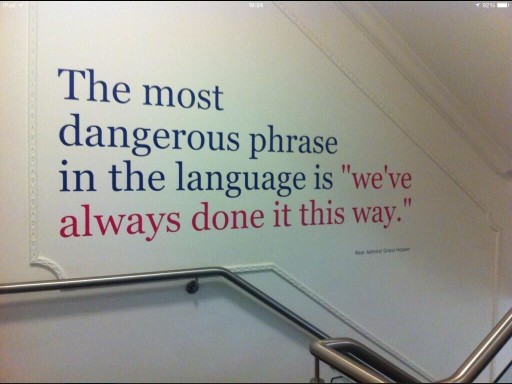 24 Nov The “We’ve Always Done It This Way” Mentality

Posted at 07:33h in Articles by Matt Barcus 3 Comments
0 Likes

As a search consultant I have the opportunity to speak with dozens of civil engineering professionals across the country on a daily basis.   I speak with key executives in the C-Suite, Project Engineers, and to every level of civil engineering professional in between.   After learning about their skill set and their contribution to their organization and to our nation’s infrastructure I always ask the following question:

“What would be a motivating factor that would prompt you to explore a new opportunity?”

Most of the time I get responses that include phrases like:

But every so often I will connect with a candidate who is working for a firm where the existing leadership has the ol’ “if it ain’t broke don’t fix it mentality.”

Over the past few months I have run into a number of firms who just cannot get out of their own way as a result of their “we’ve always done it this way” point of view.

On the other hand, I have had some first hand experience working with clients who understand the importance of change,  organizational evolution, and constant re-evaluation.

Change can often be scary, but it is necessary.  History shows that those firms who are satisfied with the status quo, and who drown themselves in   “we’ve always done it this way”  mentality will eventually be left in the dust.

May you not be left in the dust!